I keep working with my mini friend Shmigley so that he will not be so spooky anymore.  As time has gone on, I’ve continued to work this little pony only to feel at times like I was back to square one again the next time I worked with him.  What could be the reason why this little guy was not getting things? 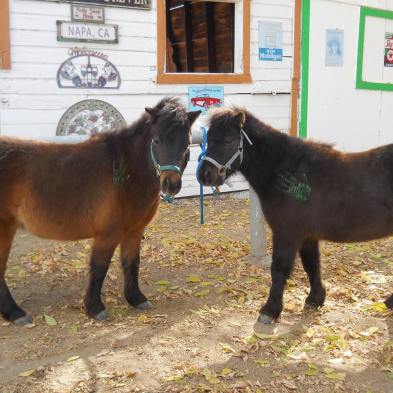 I have been taking him to my lessons on natural horsemanship and sometimes he’s made progress but then slipped back into his old habits quite often as soon as I started working him back at his barn.  I would find myself sitting on the ground in front of him, just stroking his little chest, and eventually I was stroking him all over.  However, my natural horseman instructor told me he might need some magnesium.  There are some horses who are unnaturally frightened of new things, so that was why we researched and bought a magnesium powder called Focus,  making it easier for little Shmigley to get what he needed and end anybody’s perspective on him being overly spooky.

Not only did I have to give him the Focus magnesium powder every day but I had to put in the time with him that he needed to progress.  I was told that the time needed was about five straight hours with him in one day.  After that he would need one hour a day for the next seven days.  There was a day in May that I did put in that solid five hours with him.  At the end of that period he was yawning, head down, with a lot of licking and chewing.  These were good signs that he was getting more and more relaxed.  After that I put in my hour for the next seven days.  Was there improvement?  Yes, there was, but the real change didn’t start to show until three to four months after the “Focus” powder had kicked in.

Now, Shmigley is getting more and more curious about things, mouthing things, and getting more interested in me, his handler.  It is so exciting to see this side of him emerge even after playing many different games meant for catching him.  I usually have no problem in catching horses.  It might take time but it can be done.

I do lots of gentling games with this little guy that are starting to really pay off.  He is getting excited about it when I come to work with him and Poochie.  I work him on a grass lawn since it is soft and the grass is cool.  But he enjoys being worked with so much that he doesn’t even try to snitch a grass blade or two.  He is into picking up bandanas, pushing balls around with a little “horsie aggression,” and he is starting to pick up cheap straw cowboy hats too.

Here is proof that if a horse or, in this case, a small mini who is extra spooky can benefit from getting extra magnesium supplement for his lifetime.  There are these types of horses who don’t naturally produce this kind of mineral in their brain and need to have the supplement for life, such as Shmigley.  I wonder how many other horses there are out there who have this same problem where their owners get frustrated with them.  It is frustrating when these horses seem as if there is not improvement in their temperament no matter how much you work with them.

At least there are answers to help these individuals with their horses with these kinds of problems.  They could possibly get them evaluated by a horse behavior expert and get them on the supplement they need.  I hope my experience with Shmigley helps someone else with their horses.